Color And Font Settings
Get Code

Companies often choose to implement an MES (Manufacturing Execution System) for their plant or organization, but what’s driving that decision? Is it just because everyone else is doing it? Is it to help improve efficiency (OEE) or quality?

While MES may or may not be the only solution for quality, it is not the silver bullet many think it is for OEE. 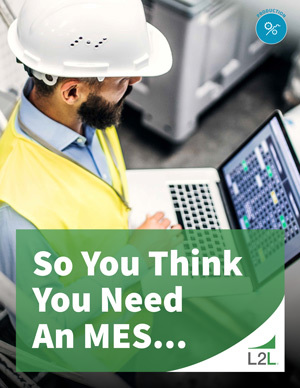 What is MES? It stands for manufacturing execution system, and is a computerized system that allows manufacturers to track, control, and document processes--from raw materials to finished goods. Being able to manage these processes can improve operations on the plant floor.

Manufacturing has been on the MES journey now for over twenty years. Many companies started with big ideas for MES, believing that it was going to revolutionize their plants to provide more automation and visibility. MESA (the Manufacturing Enterprise Solutions Association) attempted to define MES by listing 11 functions of an MES. This was merged with the Purdue Reference Model in 2000 by the ANSI/ISA-95 standard.

The model spans many functions, and this is perhaps where MES is set up to fail. While MES can help improve OEE, it is not the "silver bullet" that was promised from the start.

There may be a more simple approach to getting the majority of the benefit that many manufacturers are looking for from MES without the cost and complexity of a full blown MES implementation.

How to Use MES

What MES Can Do For You:

At a high level, MES does three core elements well:

These capabilities can be very valuable, especially if you are in a highly regulated industry in which the risk of error can be costly or catastrophic.

However, many companies don't have machines with PLC's or use paper to manage functions such as recipe and trace.  Manufacturers want to evolve their sites into digital factories, but don't want to spend years and millions of dollars on a complex MES.

Integrating is also no easy task. The complexity of PLC programming (both from the machine-level instruction and in terms of the skill required by engineering staff) has set a very high threshold that many manufacturers haven’t been able to overcome. Time and money constraints have made it next to impossible. So what can MES do for you? Ideally, it may be able to improve:

What Your MES Can't Do For You:

MES focuses solely on the equipment and assumes that all problems around manufacturing execution can be solved through sensors and PLC software. In reality, this is a factor, but may only account for a portion of the operational availability (OA) gap in manufacturing. It neglects to incorporate other critical abnormality management elements such as:

Do You Need an MES?

In theory, MES is designed to define capabilities for managing every element of the shop floor. But it's fallen short.

We've been told that MES can do it all. With enough time and money, it probably could. Of course, we've never come across a plant with unlimited resources.

In addition, due to the climate of global competition, manufacturers have been forced to narrow the MES scope because most implementations have taken years and millions of dollars. In cases where they eventually do pull the plug, they typically have portions implemented on the machine side, but the scope has been narrowed so much that they resort back to manual methods for many execution processes never delivered by MES.

In the digital age we live in, committing to anything that takes 2-3 years to implement is sure to put you behind the times before you even finish implementing.

Companies are being sold off and merged so often that they usually are left with a myriad of different MES systems that present additional challenges around consistency of data, process, and integration capability.

Many manufacturers are fed up with the seemingly never-ending journey and frustrated that the bill of goods they were sold never materialized.

Part of the complexity is often due to the fact that many manufacturers have a growing list of SKUs with shrinking IT support staff. This creates a conflict between the ongoing support of MES and other competing IT projects. We’re not saying implementing MES can’t or shouldn't be done, but you should know what it will accomplish and what it won’t.

The Challenges of MES

Historically, machines were operated by people who monitored production and visually inspected for quality. They identified the manual adjustments necessary to restore the process back to a controlled situation.

This was in a time when it wasn’t uncommon to have multi-decade veteran employees that performed the same jobs their entire career. In today’s environment, workers and jobs change, making it difficult to maintain consistency in productivity and scrap control.

As manufacturing processes have become more automated and sophisticated, the ability to remove variance and mistake-proof processes has been critical in increasing productivity and reducing scrap and over-usage. This is accomplished by automatically adjusting for variation of product attributes and machine parameters, such as:

By building this functionality into the process, you thereby have a standard to measure against. This gives you the ability to know when the process has drifted out of normal operating conditions and notify the operator that a problem has occurred.

These capabilities can be very valuable, especially if you are highly regulated and the risk of error can be costly or even catastrophic.

However, many companies aren't in that boat. Some don’t have machines with PLCs, or primarily use hand tools for assembly. Others may have these things, but they are currently using paper to manage items such as recipe and trace. These manufacturers don’t want to spend years and millions of dollars on a complex MES, but still want to evolve into a digital factory.

MES comes up short by only identifying and surfacing problems. What you need is a standardized approach that allows you to focus on systemic issues and resolve problems.

Often, there is no system in place to manage the follow-up and corrective actions, therefore the ball is often dropped and companies struggle to close the loop on common problems in their facilities. This puts additional burden on your key resources, as they are constantly fighting recurring plant floor issues.

Real-world example: Cars are getting more and more sophisticated every day, but they still rely on the operator. The computer in the car can tell you that the air in your tires is low, but it can't tell you that the tires aren't wearing evenly because you have a bad shock. Often, trying to use sensors to capture everything is just not cost-effective. Thinking you will eliminate the driver from the equation at this point is really just crazy.

It’s important to first know what your problems are. It's not uncommon to find that many companies struggle with common problems like:

Often there are as many as two hundred processes and subprocesses in manufacturing, many of which are managed with manual methods such as paper, radios, and post-it notes.

Let's say OEE for your plant is at 65%. If you were to break out the 35% between where you are and 100%, how much of the opportunity can be solved by MES?

Often, putting processes and software in place to help bridge the gaps outside the basics of machine control can deliver huge gains without breaking the bank. Putting all of your eggs in the MES basket may leave you wanting more when you don't get the improvements you had hoped for. This is why we see the promise of MES failing in most organizations.

What Is the Alternative to MES?

Maybe you still need a full-blown MES, maybe you don’t. Either way, the good news is you have options. Manufacturing is really about creating an efficient, consistent, and repeatable process.

Not only the actual manufacturing process but also all of the sub- and micro-processes that support the value-added process. Do yourself a favor—understand the process gaps in your facility and determine which of them has the greatest impact on your bottom line.

Successful companies can bridge a significant portion of that OEE gap by focusing on abnormality management. This means that anywhere a problem is likely to occur, they implement a closed loop digital system like L2L’s CloudDISPATCH to streamline and solve problems at all levels. The good news is that CouldDISPATCH can integrate with every major MES solution in the market

In order to achieve your objectives, you may still find it necessary to implement an MES solution. There is a wide array of companies available to provide these services, or you may choose to build it yourself. It’s becoming more cost-effective to outsource as companies have been deploying MES for a while now. It’s critical, however, to be clear on what you’ll be able to achieve vs. a promise that can’t be fulfilled.

You should now have a better understanding of what MES can deliver, and what MES often promises but fails to deliver. Many leading companies are achieving the efficiency they need through L2L’s Lean Execution System (LES). This way, they’re able to identify their biggest problems, and put digital processes in place to solve them, realizing significant improvements. 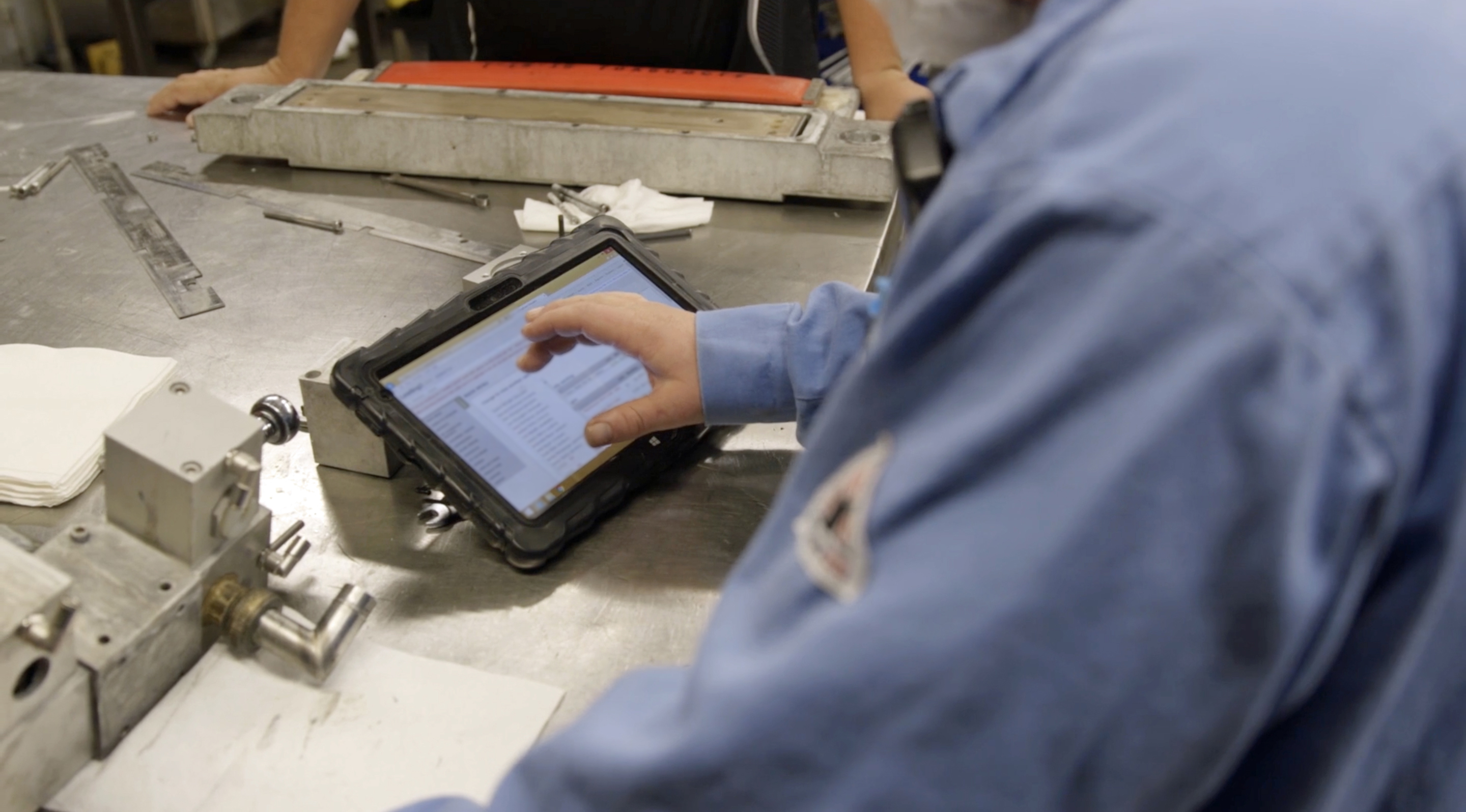 Download your free guide: So You Think You Need an MES